Axpo is going out on the water and realising a 5-MW solar plant with floating solar panels. Together with its French subsidiary, Urbasolar, Axpo is building a power plant on an artificial lake located in an old gravel pit near the city of Toulouse. Thanks to an output of 5 MWp, it generates about 6 GWh of electricity per year.

Axpo realised its first floating solar plant together with its subsidiary Urbasolar. The plant is located in the town of Peyssies, about 45 kilometres southwest of Toulouse in the region of Occitania. The artificial lake was created in a former gravel pit in the town of Peyssies. Since the quarry was no longer used for gravel mining, it was flooded and now enables the town to make a contribution to the energy transition through this conversion.

Here's how the solar panels were installed on the artificial lake: 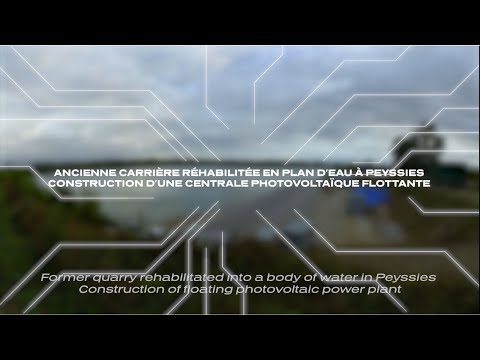 Approximately 14,000 solar modules were installed on interconnected floats to create a solar island. The solar island is held together with anchor lines fastened to the lake shore. The big advantage here is that the plant does not use any agricultural or industrial land, which has often been a point of criticism in connection to solar power plants in France.

The realization of the project required intensive research and development work. For example, the topographical features and requirements of the site had to be precisely recorded. In installing the solar modules, the protection of the fauna on the lake shore was taken into account by maintaining a minimum distance of 15 metres between the floating plant and the shore line. In addition, a comprehensive environmental impact assessment study was necessary to prove that the floating photovoltaic island would not cause lasting damage to the plant and animal life in the lake.

The floating solar panels in figures:

A plant with potential.

The plant in Peyssies is not the only one of its kind. Urbasolar has two similar projects in construction in the department of Haute-Garonne. The potential of using artificial lakes in France is not to be underestimated. According to an estimate, if one counts all the artificial lakes, hydropower pools and other non-protected waters located near grid connections, solar plants with a capacity of 10,000 MW could be installed.